Campaigns are story-driven single player missions that players can complete to make progress in the game and earn rewards. Below is a very brief description of each of the Campaigns in the principal Dawn of Titans story arc. 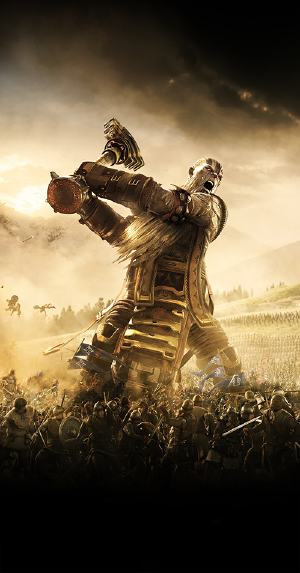 Protect your Kingdom against a deadly foe.

Investigate a realm where magic causes the dead to rise.

Fight the forces of the sorceress, Malia, as you investigate the Cabal.

Defend yourself against an unseen enemy.

Hawkin's attacks continue as your press deeper into enemy territory.

Continue to investigate the Cabal, and fight a new and powerful foe.

Under siege in your own strongholds, you must defend yourself, or face destruction.

As the war with Falbard continues, an old adversary reappears.

Kalin escaped previously, but this time you must defeat him for good.

With four members of the Cabal defeated, you must confront their mysterious leader.

As you fight the Acolyte, you must also find out more about his motives.

The Cabal is all but vanquised. It is time to defeat the Acolyte once and for all.

Help the Pharaoh of the the Unak deal with a gathering insurrection.

Assist your Ragnar allies with a conflict between Clans.

Aid the Elithen Emperor against one who would see him deposed.

Protect the Mossmane lands from a deadly and destructive invasion.

Navigate shifting allegiances in the war against the Unak rebels.

As Ulgan prepares for war, you must uncover the malicious force that guides his hand.

As Thenia marches on the Elithen capital, the Emperor's life is in danger.

To free the Mossmane lands, you must break the invaders' hold over them.

March with Dunasir upon the Unak capital, and a final battle with the Pharaoh.

If war is to be averted, you must test your might against Ulgan.

The Emperor is safe, but until Thenia is defeated, the realm is still in peril.

As Tyron continues to fight, you must drive him out of the Mossmane lands for good.

Investigate the mysterious Brotherhood, who have made a home in your Kingdom.

Your Kingdom will not be safe until the Brotherhood have been driven out.

Search the Brotherhood's territory for a means to defeat Almarand.

The Sanctuary of Flame may hold the key to defeating Almarand, if you can find it.

The Sanctuary Guardians are fearsome opponents, but you share a common enemy.

The Sanctuary may contain the knowledge you need, but Almarand's forces seek to stop you.

Seek out the Shrine of Souls, where a means of defeating Almarand can be found.

Journey through a lawless and hostile land in search of the fabled Heart of Korthan.

Fight your way to the Shrine of Souls, and encounter a new revelation.

The first of the Remnants of the Heart of Korthan lies in the lands of the Brightwater Alliance.

The lords of the Brightwater Alliance rally their forces in an effort to defeat you.

Battle to the centre of the alliance lands, and lay claim to their Remnant.

In the land of Valnir, King Dederic uses the second Remnant to keep himself in power.

Dederic's own people join your cause against their tyrannical ruler.

The capital of Valnir is in sight, but you must fight bravely if you are to recover the Remnant.

Journey to the lands of the Darkblood Pact in search of the third Remnant.

As the war against the Darkblood Pact continues, a chance to claim the Remnant presents itself.

With the Remnant in your possession, you must fight your way out of the Darkblood Pact's realm.

The Heart of Korthan has been restored, but the threat of Almarand grows ever greater.

As you go in pursuit of Almarand, the first of his allies blocks your path.

To follow Almarand, you must pass through a poisonous wasteland.

As you venture into unknown lands, Almarand's armies rise up in defense of their lord.

As you confront the forces of Almarand, they assail you with powerful magic.

Almarand's second ally emerges to stop your pursuit of his master.

As you draw closer to the Heart of the World, Almarand's elite forces move to stop you.

Both Titan and mortal stand between you and Almarand, but you must prevail over them.

As you close in on Almarand, you venture onto deadly ground.

You are all that stands between Almarand and his rise to ultimate power.